Meet Huckleberry Ethan. He has lots of ideas.

We’re still working (I’m dreaming and Nathan is trying to figure out how to make things work) on formatting and editing our site. Soon, there will be a few more tabs, and I’m slowly working through all the old posts and categorizing and tagging everything. I have about 1/3 of the old posts done. There are over 500 in total!  We’re also working on the look and what exactly we want on this front page, which posts to include in our favorites, and making a really fun “about” page. Keep checking. It keeps us motivated to finish this project 🙂 !

Ethan is a talker. He was using words earlier than most boys and he just kept adding to his vocabulary. A few years ago I read a study that said that watching tv was bad for young children and babies because it would hinder their speaking or vocabulary development. I remember thinking that it was a good thing I had sat Ethan in front of the television when he was little because I didn’t know if I could handle a more verbal Ethan. That’s probably not a typical response to hearing about the research. It may just be me 🙂

Well, it has turned out that he’s not discriminating in regards to who or when he does the talking. When we go shopping, he asks the sales clerks if they have Lego Star Wars for the Wii and then he proceeds to tell them everything he is doing in the game. At church, during the time when we greet people around us, Ethan pops up out of his chair and says hello to as many people as he can before the time is up. Our church also has a children’s story time before the kids go to their children’s church class. Audrey insists that I go up with her. Ethan flies out of his seat and runs down the aisle to get close to the teacher or to seat by Ethan T.O.E (The Other Ethan). I end up with a front row seat to hear the children’s story and my son’s response. He has spoken up so many times now that I don’t even remember all the times he’s said something that caused the congregation to howl in laughter.

I was just asking Nathan if he remembered some. Ethan usually answers the rhetorical questions. In last week’s story about eagles, the storyteller asked if they would like to be like an eagle, and he said “No, they have to eat worms!” and then he stayed on stage after all the kids left and told the storyteller what was great about being an eagle (you can see storms coming from a long way off). Today, the storyteller (Emery, our pastor’s wife) was talking about Palm Sunday. She said it was the week before Easter. Ethan waved his hand in the air and said, “You know what’s great about Easter? I get to go see Nana and Grandpa. . .” at this point Emery told Ethan that he could tell her the rest later. She was very sweet and gracious so Ethan didn’t feel bad. Meanwhile, Nathan is back in his seat and telling one of the parents near him that he’s terrified of what Ethan will say every time he goes up there.

The beautiful ending to today’s escapade happened as I went to pick up Ethan and Audrey from children’s church. I was gathering the kids when I heard one of the teachers say, “I want to meet Ethan’s mom.” Oh dear. Fear struck my heart. He came over and said, “I’ll be praying for you.” 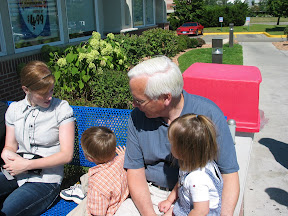 (Here’s a picture of Ethan striking up a conversation with a random stranger as we waited for lunch one day.) 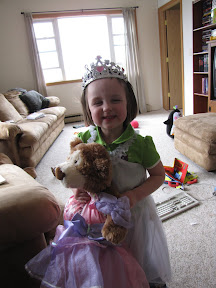 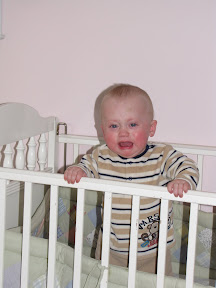 I took the first picture while I was talking on the phone to Sara. The second one I took after Isaac woke from his nap. I went to get him and he was standing up! So, I had to run and get my camera and he didn’t like that I wasn’t picking him up. That big baby is almost 10 months old and is tipping the scales at 23lbs. I call him Bubba.

On Monday morning, we started out our day by listening to “Invade” by Watermark. Ethan was grooving around the living room and Audrey was dancing. I guess I could say they both were dancing, but that doesn’t adequately describe the difference in their approaches. What a great way to start our day.

This is the chorus:

Jesus, come and walk the halls of this house.
Tread this place and turn it inside out.
With your mercy. . .
Jesus, teach us the prayers that open these doors.
Until your light comes in and illuminates these floors.
And let your truth be on our steps and in these rooms.
Jesus, invade. . .

Nathan is probably wondering what’s come over me to motivate me to get out of bed earlier and start my morning routine of prayer, Bible reading and exercise. I stumbled across a blog, inspiredtoaction.com, that challenged me to make some changes to enable me to be a more effective mom and wife. I was reading her e-book Maximize Your Mornings in which she talks about starting your day off with Bible reading, prayer, planning your day and exercise. She had listed some some songs that she listens to when as she’s getting ready for her day. Invade was one of them.

My six week study on the life of David is complete. I mentioned in an earlier post that I had been doing some thinking about what it was that made David a “man after God’s own heart”. He made a lot of mistakes. So, that statement is confusing and encouraging at the same time.

As I was getting ready for the last session with our group, I made a list of things that were different about David. Here’s the list I made as I paged through the completed pages of the study:

What characterized David was his perseverance and continual dependence on God. He didn’t let his missteps keep him off track.

The other big thing that jumped out at me regarding David’s life was the timing of God’s covenant with him. In 2 Samuel 7, David had not been king for long and had just brought the ark of the covenant back to Israel. He wanted to build a temple, but God had other plans for him. This was the time where God established and communicated his promise that the Savior of the world would come through David’s line. This was a plan that would  include Solomon, the son that the Lord gave to David and Bathsheba after their first son died as a result of David’s sin.

God certainly didn’t want David to make the horrible decision to claim a woman for his own that wasn’t David’s and then commit murder, but He did know that was the way that David’s life story was going to unfold. When David took Bathsheba and killed Uriah, God wasn’t wringing his hands thinking, “What should I do now to make this right,” or “How am I going to fix this mess?” There was never a time that David’s life was going to be any different than it played out. God knew what would happen and how David would accept responsibility for his actions and had already provided a way to fulfill his covenant and blessing. I love the application that how my life is today (with the good things and the disappointments) is not an alternate ending to my story. It was never going to be any different than it is unfolding now. It’s encouraging and freeing to know that He isn’t thinking, “What am I going to do now? He already knows and his promises to us are firm. God’s character doesn’t depend on my actions.

I’m sitting here icing my knee and feeling sorry for myself.

A couple of weeks ago, my right knee started hurting a little (around the time I ran my first 5 mile run). I ran a little slower and did some lower mileage weeks, but it didn’t get better. In fact, my right knee started to hurt too. The pain is on the outside of both knees and as best as I can tell by diagnosing myself through googling my symptoms and reading running sites, I have an IT Band injury. What’s that? I’m so glad you asked. According to sportsmedicine.about.com the IT Band is “a strong, thick band of fibrous tissue that runs along the outside of the leg. The IT band starts at the hip and runs along the outer thigh and attaches on the outside edge of the shin bone (tibia) just below the knee joint. The band works with the quadriceps (thigh muscles) to provide stability to the outside of the knee joint during movement.” This will be interesting to about 2 of you! IT Band syndrome is pretty common in runners and can happen for a variety of reasons: overtraining, doing too much too soon, running on the side of the road with causes one foot to be lower than the other the entire time you’re running and faulty biomechanics (muscle tightness, lack of flexibility, bow legged).

So, I’m sidelining myself completely for two weeks and working on icing twice a day, taking ibuprofen and doing stretching and strengthening exercises to help with the pain and hopefully speed up my healing. The strengthening exercises should help when I return to running as strong muscles in the quads and hamstrings help protect the knee from injury. I guess I should also call my doctor tomorrow and see if she wants to see me or refer me to sports medicine doctor or if she has other options for me.

It’s such a bummer though because I’ve been running for  6 1/2 months without any problems. I ran all through the winter in the bitter cold and I was really looking forward to running in sunny, warm weather. Now, I can’t. I had finally found an exercise that I really love. I’ve never loved any sort of exercise before and the thought of not being able to to it is depressing. I’m hoping I’ll be back in the game soon. I would really appreciate prayers for healing.

We have shifted from Blogger over to WordPress. We like what we can do with the new software, but things will be a bit messy during the transition — all of the articles made it over just fine, but we’re taking this opportunity to go back and clean up our tags and categories. 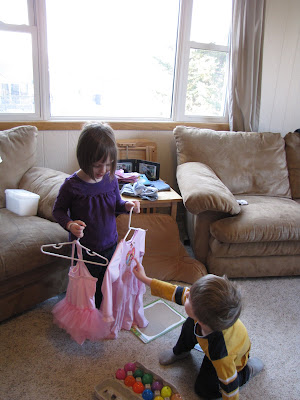 I borrowed a camera from Crown today. After all, it’s part of my job as IT Director to play with…erm…familiarize myself with the technology at Crown. 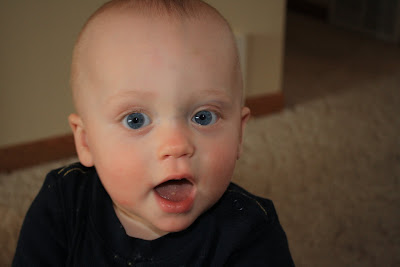 I think Isaac was in awe of me. He usually is… 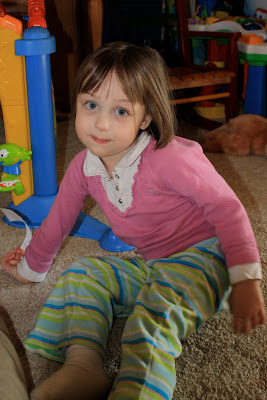 I managed to catch a slightly less scrunchy, squinty smile than normal from Audrey, for once! …says the man who winks every time he smiles… 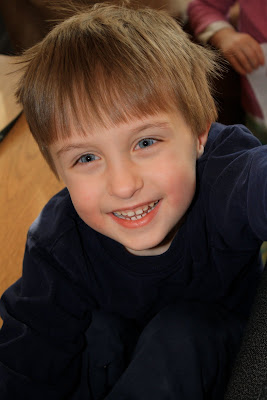 This is my son. He sometimes lets me take pictures of him. But not often… 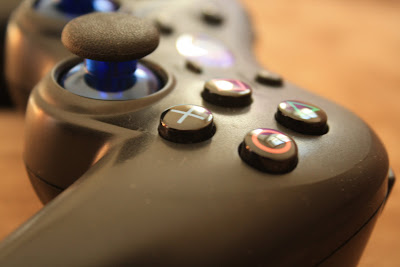 This is for Lego Batman and Lego Indiana Jones. 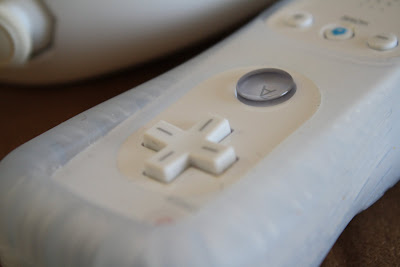 This is for Lego Star Wars 🙂