Isaac was 15 lbs, 7 oz. and 25 inches long. He is 50th % for height and 70th% for weight. I need to get him on his tummy more. I have not done well with that. I also asked for a referral to see Dr. Wood regarding his had being a little flat on the right side. I’m not sure if it’s bad enough to need treatment, but Dr. Wood is THE doctor in this area that treats plagiocephaly and it takes a long time to get in to see him. My nurse called to schedule the appointment today and we aren’t able to get in until November 6th. We’ll get his opinion and decide what to do from there. I know I wont regret having an expert opinion.

Audrey is 32 lbs and 37 1/4 inches. 50th% for both height and weight. She was very excited to be there! Audrey talked about going to the doctor’s office and standing on the scale all morning. She cooperated very well when we were there. Actually, they all did well. Taking 3 kids is a bit of a challenge. Getting them from the parking lot to the clinic in the rain was exciting. I have a couple things to work on with Audrey- I need to help her identify colors and also make sure she is getting better at drawing shapes (copying ones that are drawn for her). I think it’s a second child thing. I just haven’t felt motivated to do all the things that seemed so exciting with Ethan. Also, Audrey has a systolic heart murmur. Our doctor thinks it’s innocent, but she suggested having an echocardiogram done. I’m waiting to hear back from Children’s Hospital to schedule that. In all honesty, that makes me a little nervous. I’ll be happy to get that done and get a good report.

The day got away from me.

I’m set to run again today. I hope the rain stops. If it doesn’t, I might just use the nordic track. The problem with that plan is that I am very uncoordinated on it. It could be an interesting sight. I’m going to keep my official weigh-in day on Friday, but I usually weight myself a couple times during the week. I’m down a little already from last Friday.

Audrey and Isaac have doctor appointments today. Isaac has his 4 month check-up and Audrey has her 3 year check-up. I hope all goes well. I’ll need to have my infant Tylenol ready for Isaac after his shots. Speaking of Tylenol, I heard there was a recall recently. I should check to make sure that ours is from a batch that is alright. I have been using a scale to figure out feedings for Isaac, but the official weight will come from our doctor visit. I think Isaac is a little over 15 lbs. Still our biggest baby.

Taking all three kids to the doctor’s office today should be interesting. I hope they cooperate. If more than one child has shots, I may be in trouble.

Hopefully, Nathan will check in today after his run.

I made it through 1 week of the Couch to 5K running program! Today was hard — my shins were hurting so bad by the end, but hopefully my new shoes should help with that. My old shoes were pretty run down.

I really think I could get to like this…in time. And it’s worth putting in that time 🙂

**I was logged in as Nathan when I posted this. It’s probably obvious that it wasn’t him, but I thought I would make sure you weren’t confused!**

Nathan thinks it’s fine idea to use this month to blog daily about our progress in making better decisions in eating and exercise. I’m hoping we can both check in at least every other day.

I’m starting out this month at 165.8 lbs. I was hoping to be down to 160 by the beginning of this month, but I didn’t get there. I’m going to try to get there by the end of October. Today was good! I finished week 5 of the Couch to 5k program. Today’s session was a 5 minute warm-up walk followed by 20 minutes of running. I ended up going 2.06 miles in 27 minutes. That’s not all that fast, but I actually did run for a full 20 minutes and it felt good to meet that milestone. Not only did I push myself to do the run, but I did it in the rain! We went shopping this afternoon and I rewarded myself by buying some new pants and jacket for running.

It’s been a while since I really talked about anything of substance. I’m not sure where to begin.

I’ve been all over the place emotionally. There have been a number of things that have been stressful. Two weeks ago, I spent almost 20 minutes crying at my Bible study. Someone questioned one of my answers to a personal question (you know the kind where you just give your opinion on something?). I was in such a crazy mental state that I started crying and I couldn’t stop. It was seriously one of the most embarrassing things I’ve ever experienced. I had all I could do to keep myself from sobbing out loud. It was that bad. I’m not exaggerating. I considered leaving the room, but I thought the women would think my feelings were hurt and that I was mad at them. I just sat there silently with tears streaming down my face. The crying really had more to do with everything else I had been thinking about and not the Bible study.

I considered not going back because I was so mortified. Nathan convinced me otherwise. We had a praise and prayer night instead of our regular study. It was good to be there. I was able to have a good conversation and some prayer with one woman in particular. It was really encouraging.

I’ve been running using the Couch to 5k program. This is week 5 of the 9 week program. I have one more run this week and I’m looking forward to the challenge. My eating has been horrible though. We had lots of sweets leftover from Audrey’s party and I should have just thrown them out. Instead, I grazed on them for several days before dumping them. So, the running has been good, but if I don’t get my eating under control, I wont be losing any weight. I plan to change that starting now. Surely, I can eat pizza tonight without stuffing myself (right, Nathan?). Oh, and Nathan has been inspired to run too. This is week 1 for him. I haven’t talked to him about it, but maybe I should spend the month of October blogging about our eating and exercise. That would be a good way to stay accountable. Hmmmmm….

Ethan has started AWANA again. He is a Cubby again this year. I think he’s enjoying it. I’m so proud of him. It’s so great to hear him learn Bible verses. Audrey has participated a little here at home. It seems like Ethan was just a baby and now he’s playing PlayStation games, reciting Bible verses, adoring his baby brother and asking me (while he is sitting on the toilet) to pray that his bottom will feel better.

I listened to a fabulous sermon online yesterday.It was by Andy Stanley and I guess it was the first one in his “Your Move” series. It was titled “Really”. It was about questions you should ask yourself before making a big decision. I think there will be 4 sermons and 4 questions. This particular sermon was about asking, “Am I being completely honest with myself?” or “Why am I really doing this?”. There is a link here. Click on “Your Move” and then select “listen”. It gave me a lot to think about.

I mentioned earlier that Isaac had been cranky. He has been crying while I’m nursing him. I borrowed a scale and have been weighing him before and after I nurse him. It seems like he is getting roughly half of what he needs. I feel kind of like a failure when it comes to nursing. I don’t understand how it can be so easy for everyone else. It’s supposed to be supply and demand. Well, when Isaac isn’t getting the milk he needs, he doesn’t work for more. He just cries. That doesn’t help increase the milk supply and I’ve decided that I’m not going to spend the time nursing, then bottling and then pumping every three hours. It’s too much with 3 children. So, I’m nursing and then giving Isaac a few ounces of formula each time. Isaac has been like a different baby the last 2 days. He is so happy. Having his belly full has made a huge difference. He’s content, playing better, not needing to be held as much and he’s napping better. He even slept for 9 hours last night.

That’s the update for now. I hope you all have a great weekend. 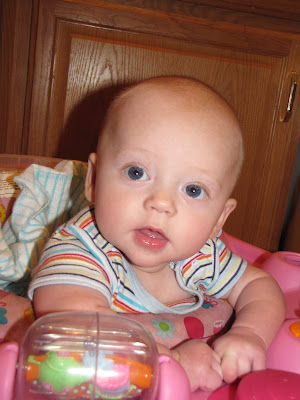 Isaac in his pink exersauser. Just 2 days shy of 4 months. 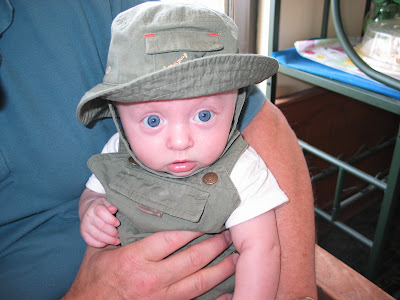 This is Ethan at 4 months. Ethan’s face is just a little more round and his eyes are lighter than Isaac’s. They do have the same nose though 🙂 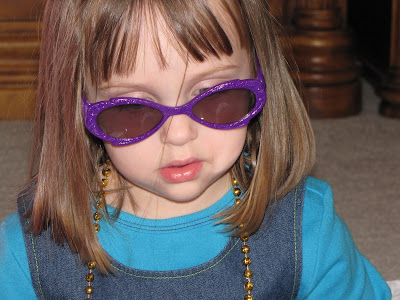 In case you think my children are perfect…

What to know the truth about my little angels? Well, this adorable child whines A LOT. She also plays a fun little game at bedtime. Now that she is potty-trained (mostly), she has decided that she needs to go the bathroom at bedtime. I decided that I wasn’t going to let her use going to the potty as an excuse to come out of her room. I put a little potty in her room and told her she could use that if she needed to go after I tucked her in. It has not deterred her in the least. The second Nathan and I walk out of the room and turn off her light she pops out of bed to go sit on the potty. She does this constantly for about an hour. She also likes to turn her light on and leave it on when she does this. When I get up to feed Isaac at 3 or 4 in the morning, her light will be on again. I turn it off. By the time we all get up in the morning, the light is often on again. Argh. My child who previously slept really well, is now waking herself up to go to the bathroom at all hours of the night. This makes her tired and whiney during the day. 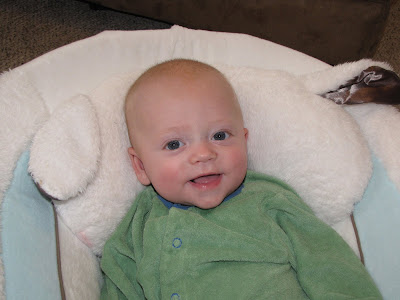 Isaac. Isn’t he cute? I think so, but he’s decided not to nap as long as he used to. Also, he wants me to nurse him to sleep for every nap. He’s hungry when he wakes up from his nap and 1 to 2 hours later, he’s tired and needs to sleep, but he wont go to sleep without nursing. I feel like that’s all I do. He’s been crying when I have been feeding him lately. He’s hungry and I’m not sure he’s getting enough from me. I did use a scale to weigh him before and after I fed him one time today. He got 5 1/2 ounces. That’s pretty good, but he nursed a lot longer than he normally does. Almost twice as long. I should be enouraged by the scale, but now I’m wondering if he’s only getting 2 ounces a time normally. If that’s the case, that’s probably why he wants to nurse all the time. He’s probably going through a growth spurt. I hate this uncertainty.

No picture of Ethan. He decided to grab Audrey’s foot and trip her at the library today. He also refused to talk to my dad on the phone.